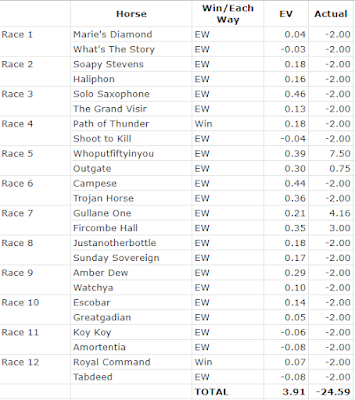 W e all know that a good bet can lose and a bad bet can win.  I am trying to track the good picks for the Handinaps Competition Races based on Expert opinions, and market opinion. Meet the Experts Starsports trader Flynn Goward made a market for the overall winner before the start of the first race.  These are the entrants that he put top of the market.  I respect his opinion and the opinions of all below.   Each race I will compare the distribution of their picks to the rest of us guessers. RowleyfileRRR -  Freelance racing & betting writer, analyst & forecaster. Form, time & sectional ratings. ATR regular, HBF. #BettingPeople Interview . Business of Betting Interview . davidjohnsontf -  Horseracing mainly, sometimes running. Flat Editor for @Timeform . Occasionally heard/seen on @SportingLife . drankfrebin - Steve Wilson pro punter/consultant. jamesaknight - Racing Trader Director at Entain. tony_calvin - Racing journalist/tipster, podcast. trendhorses - Andrew Mount  D
Post a Comment
Read more

Eurovision: Build your own Running Order

Running Order (Only works on desktop) Drag and drop the country "post-its" from "The Board" below to assign your own running order.  It indicates on the post-it whether the act has been drawn in the 1st half or the 2nd half.   First Half 9. Italy Second Half The Board France (1st) Germany (1st) Spain (1st) Switzerland (1st) Ukraine (1st) Netherlands (1st) Iceland (2nd) Norway (1st) Armenia (1st) Finland (1st) Czech Republic (1st) Romania (1st) United Kingdom (2nd) Lithuania (2nd) Moldova (2nd) Portugal (1st) Greece (2nd) Poland (2nd) Belgium (2nd) Azerbaijan (2nd) Estonia (2nd) Australia (2nd) Sweden (2nd) Serbia (2nd) Try and predict the running order.  There are no rules here and it will be at the Italian TV Producers discretion with EBU there to make sure fairness is observed.  The running order can be quite important - acts in the last 5 slots have histo
Post a Comment
Read more 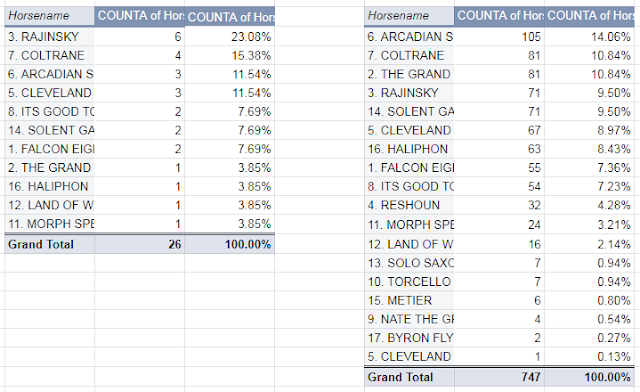 I am running catch up here as there were two more rounds of the Handinaps this weekend.  I will continue the series of post for now.  The idea is to track the good bets whether winners or losers.  Previous reviews are here . Race 3 - The Experts This week the experts liked Rajinski and Coltrane in bigger numbers than the rest of us.  I speculated before that the experts were picking based on the draw  or based on  one that the betting market might leave behind .  Race 3 Distribution of picks (Experts only left, All right) This time I am going to look at it based on steamers.  The experts will be used to working this way, identify one overpriced in the morning market.  If they are right then the market will catch up and the horse shortens.  Basically, beating the closing price.  This is how you make money betting.  The problem I see with picking this way in the Handinaps competition is that you do not get the early morning price, everything is settled at SP. BFSP compared to Morning Wei
Post a Comment
Read more

I dont know if it is just me.  But twitter sucks up an absurd amount of time.  One single simple throwaway tweet can create an obsession in me. You start writing a reply, and nah don't have time to get involved in a twitter argument.  Delete.  Then okay I'll just make my point and leave.  So you start writing again.  Then delete again as you realise half way through you haven't a clue what you are talking about.  And so begins hours of research, analysis and rethinking and maybe a reply comes out of that and maybe not because now you have so much to say 256 characters are not enough (plus twitter has moved on).   This set me off last night https://twitter.com/JeffreyBenson12/status/1522353212325462016 Guys in Stiff Suits So apparently Bet365 dont know what they are doing.  They have no clue.  Likewise Skybet, William Hill, Paddy Power and basically all the major hugely successfully bookmaking companies.  They're just paper pushers, they won't last.  And certainly th
Post a Comment
Read more 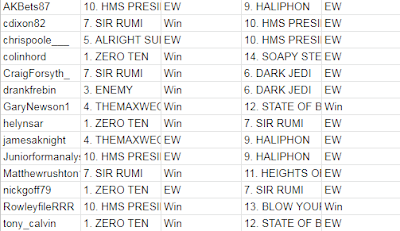 I enjoyed reviewing the last Handinaps competition race  here .  So I am repeating the analysis here for the latest race.  Again successful betting/tipping is about process rather than outcome.  So I'm not going to say that Enemy Win only was the best tip.  I will look to the market and the experts to see what they thought. The Experts Below are the list of experts (with picks).  These were jud ged by the Star Sports team as the favourites to win outright when they released their original odds. They differ from the rest of us guessers (see tables below).  Sir Rumi, HMS President and Haliphon were more likely to be picked by the experts.  These were actually the highest draws in stalls 12, 13 and 14.  However curiously Musselburgh appears to favour a low draw for Mile races .  So I am not sure why the experts favoured those.  Maybe trying to pick against the crowd. Distribution of picks (Experts only left, All right) The Market The quirk of the Handinaps rules is that every race is
Post a Comment
Read more

Handinaps - How did you do?

With Johan winning the Lincoln on Saturday, 21 tipsters in the Handinap competition will be very happy.  But we all know that a good bet can lose and a bad bet can win.  It is about the process rather than the outcome.  So what were the good bets? The Experts StarSports had released a market on who would win the Handinaps competition.  It quickly reflected the money as a couple of users clearly wanted the honour of going off as favourite.  Some unknown names moved to the top of the betting and the compiler has mentioned some losers in the book. However before the market was turned upside down I took a screenshot.  It would be handy to have a list of twitter profiles which were rated highly for their tipping ability, coming from another expert on racing and trading.  So this is the list that I will use as the experts.  The list is solid, I've enjoyed any content, interviews and guests on podcasts this list have put out. Below are their reported picks.  And broken down by frequency:
1 comment
Read more

This article relates to the horse tipping competition organised on twitter by Handinaps . I have run a few basic simulations to give an idea of distribution of scores for different player types (sharps/guessers) and different strategies (low risk/high risk). Fav Sharp : This is a low risk strategy for a sharp punter that is adept at finding value on the shorter priced odds.  The parameters I have used here is that he has a 10% edge and he can find two horses about 5.0 decimal odds in each of the 40 races.  He tips both. Fav Guesser : This again is low risk, the favourites are short enough prices that you would expect the final position to converge to close to the expected value over 40 races (80 picks).  This type of player however is not sharp, so his EV will average out at some negative number to account for the margin the bookie applies to favourites.  Again the parameters I use here is 5.0 decimal odds and giving the relatively uninformed punter a -15% edge. Mid Range Sharp : As th
Post a Comment
Read more
More posts